Have you ever wondered what made a place famous? Obviously the answer is the points of interest. Notable landmarks such as the Eiffel Tower in Paris or the Rio de Janeiro’s statue of Christ the Redeemer. Natural beauty such as the Jungfrau region of the Swiss Alps or Arizona’s Grand Canyon. Not to mention places of historic and architectural significance, from the Tower of London to New York’s Empire State Building.

However there are also some places that are famous for quite bizarre reasons. There’s the US town that completely went to the dogs once its general store burned down, to the UK laneway that became the butt of pranksters.

An “undiscovered” Pacific Island and an Australian mountain peak that continues to grow. Some of these places you may not want to visit, others may prove a tad difficult, unless you venture into the online world. All of them are famous for quite bizarre reasons

The town is listed on the National Register of Historic places, with the historic store, dating back to 1831, listed as the most well-preserved country store in Kentucky. However this small community’s general store is not the most famous aspect of this town.

When it was destroyed by fire in 2016 the small community rallied to reconstruct the iconic store from donated lumber from other period buildings through a unique community fundraiser.

Each year since 1998 they have held a Mayoral election where the candidates were all canines, a tradition which has continued for more than 20 years.

The first elected mayor, Goofy Borneman-Calhoun, a dog of “indeterminate breed” held office from 1998 until his death in 2001 at the ripe old age of 16. The second mayor, a black labrador by the name of Junior Cochran’s term of office was dogged with controversy. He was barred from entering the general store due to health concerns.

The current mayor, Brynneth Pawltro successfully raised $9,000 towards the reconstruction of the town’s general store. Votes in the town elections cost $1 each, with no limits on the number of votes cast.[1] 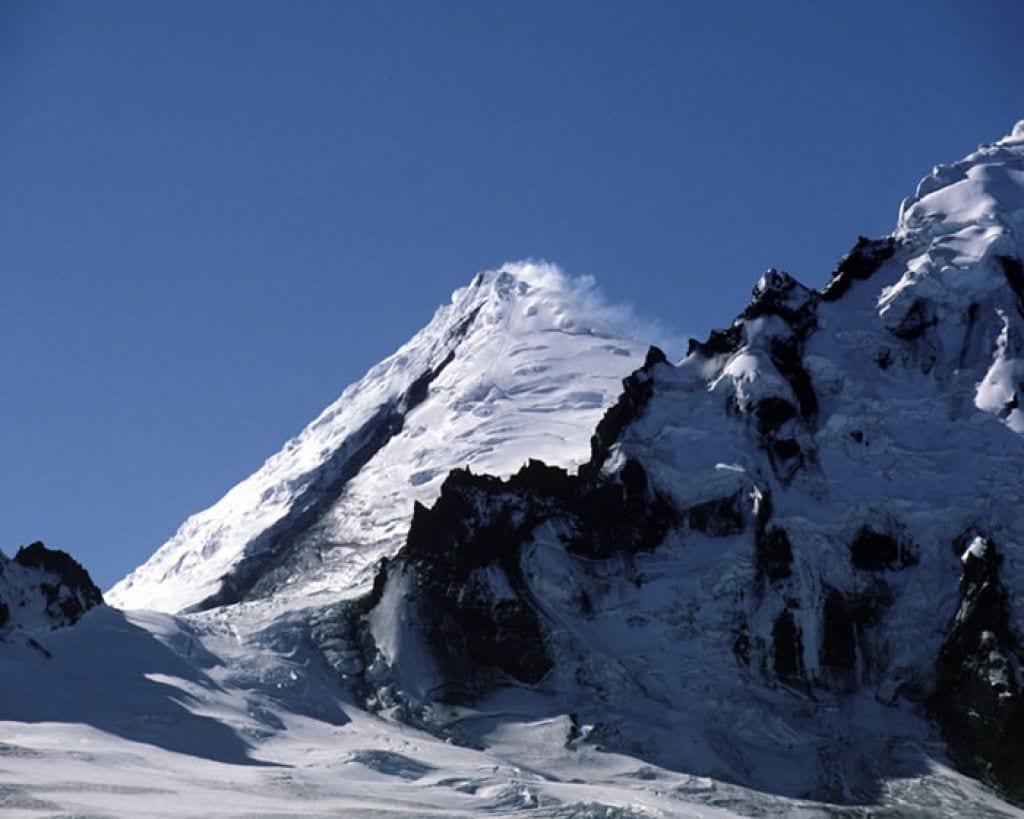 Not only is Australia’s highest mountain peak located off the mainland, it also continues to grow.

While most people would think of Mount Kosciuszko as Australia’s highest mountain, Mawson Peak is officially the tallest mountain in Australia at 2745 meters the last time it was measured. The active volcano is located some 4100 kilometers off the Australian mainland on Heard Island, south west of Perth in the Indian Ocean. The constant interaction between molten lava and glacial ice is causing both the peak and the surrounding island to continually grow in size. It is estimated Mawson Peak could currently stand at approximately 2800 meters.

The island is concealed in cloud for most of the year as the fire and ice continue to react. Research scientists are usually the only visitors who undertake the dangerous week-long trip into the inhospitable conditions surrounding the island. Not an ideal skiing or hiking location, as “Big Ben” has been erupting continuously since 2012.[2] 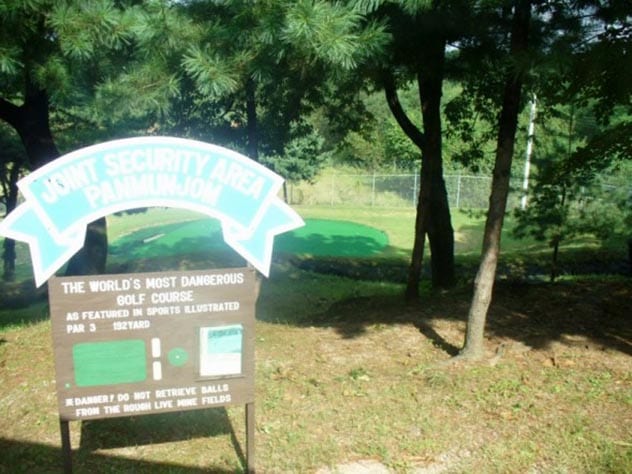 You’ll certainly need military precision to avoid causing an explosion at this Korean golf course. Camp Bonifas is no ordinary course, in fact it has been deemed the most dangerous golf course in the world. The par 3, one-hole golf course is on the edge of the United Nations Command Post, 500 meters from the demilitarized zone between North and South Korea.

Surrounding the course you will find land mines, barbed wire, and an empty machine gun nest. Stray shots have been known to have exploded a land mine. Little hope of retrieving your golf balls on this course.

Surprisingly, up to 1000 tourists a day visit the unique course for the ultimate adrenaline-filled round.[3] 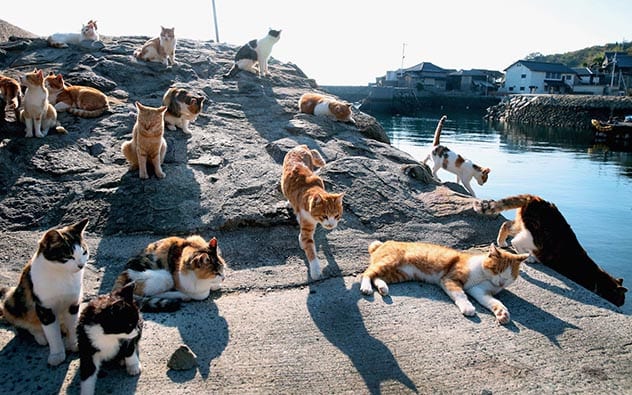 If you have an aversion to cats, the island of Tashirojima is probably not the place to visit.

The remote rural island off the Japanese coast of Ishinomaki is predominantly inhabited by cats. In fact with just 100 human occupants, the island is also home to an estimated 800 cats

The felines date back to the 18th century, when residents used the cats to protect their textile industry, preying on the mice that threatened their silkworms.

In more recent times, fishermen would feed the cats from the shore, believing they brought good luck to the fishing fleet. A shrine to the feline population “ Neko-Jinja” has even been erected in the center of the island.

Today tourists make the hour-long ferry trip to “Cat Island” where the locals are quite welcoming of a cuddle. The humans also appreciate visitors to their remote retirement village. There may not be many tourist facilities such as restaurants or cafes, however, visitors are able to stay in “cat-shaped” bungalows along the foreshore.[4]

6 The Town that Wasn’t There 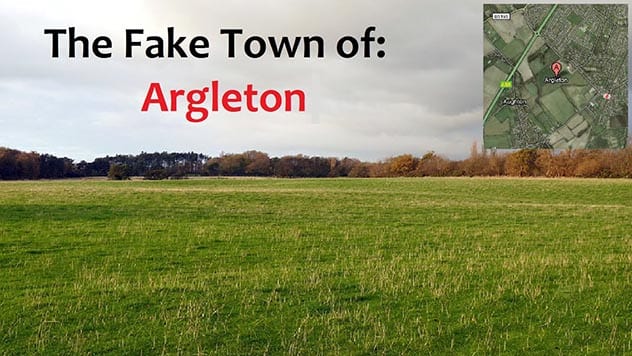 The small UK town of Argleton in East Lancashire has an official postcode, real estate listings, weather forecasts, and job vacancies online. The only catch is that it doesn’t actually exist.

The town which appears on Google Earth and Google maps is actually a vacant field adjacent to the A59 highway. Online services utilizing Google data mistakenly attributed many businesses and services within the same postcode area as being located in the phantom village.

The anomaly was detected in 2008, receiving worldwide media attention and spawning a host of fictitious websites in a mockery of the Google error.

Explanations for the town’s appearance in Google include cartographers inserting fake place names to catch out copyright violations, to confusion with the parish of “Aughton” in which the fictitious village is located.

According to Google, Argelton is Currently “closed”.[5] 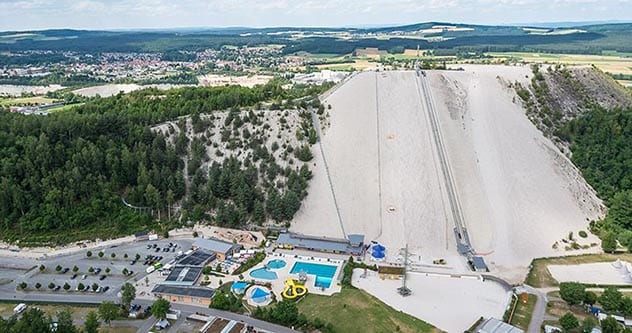 A fundamental requirement for a ski field would have to be snow, one would presume. However Monte Kaolin is the world’s only snow-less ski field. Located in Hirschau, Germany, Monte Kaolino is in fact a 110-meter high man-made sand-dune.

Named for the kaolinite quartz sand which was historically mined in the district, the sand became a problematic by-product when producing the mineral used in many industrial and medical applications.

The slag-pile of sand had grown so high by the mid-1950s that one local grabbed the skis and used the mountain for ski practice. Before long a ski club was formed with sportsmen wanting to practice their downhill moves on the pile of sand.

Today the sand mountain even boasts a ski-lift, campground, and water park, and also hosts the world sand boarding championships.

Quite a unique use for an old industrial waste dump.[6] 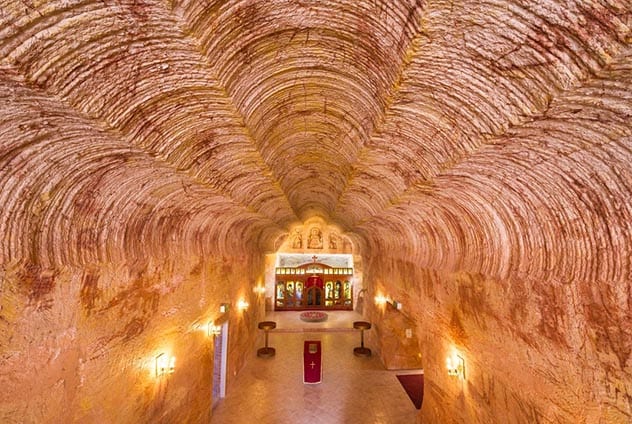 The iconic Australian country town is a remote community with a pub on each corner, where the Akubra-wearing locals gather to say “gidday”. However the town of Coober Pedy has one distinct difference. Most of the town’s 1700 residents all live underground.

The mining town in the South Australian outback records summer temperatures of up to 45C (113F). Early opal miners adapted to the inhospitable environment by creating underground “dugouts” to escape the searing heat. The local indigenous population were so amused by the miners creating rabbit-like burrows they referred to the town as “white fella in a hole”, or “Coober Pedy”

Today most of the town’s homes and public buildings are carved out of the subterranean sandstone, where the temperature maintains a cool 23C (75F) year-round. Here you will find homes, churches, restaurants, bars and churches, located deep underground without natural light and airflow.

The desolate landscape formed the perfect setting for the 1985 movie “Mad Max Beyond the Thunderdome”.[7] 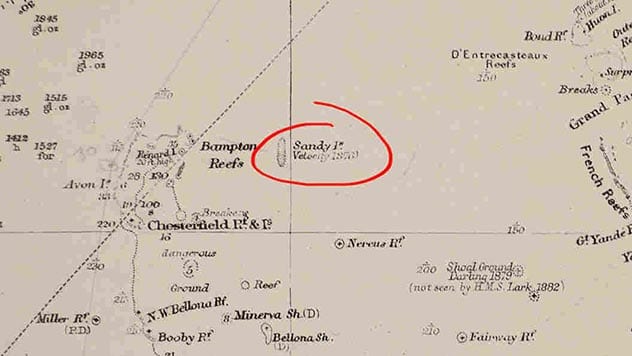 Explorers ventured out on many voyages of discovery throughout history, however, very few places have ever been “undiscovered”.

Captain James Cook first charted the tiny island of “Sandy Island” northeast of Australia in 1774, with the whaling ship “Velocity” confirming the existence of the landmass in 1876.

The remote Pacific Ocean island conjures up images of an idyllic holiday among the swinging palm trees. However you may find difficulty in arriving at your destination.

Despite appearing on a number of maps, seafarers failed to locate the 24 kilometer long island. Google earth even recorded the existence of the pacific island, using data from these historic paper charts.

The island was officially “undiscovered” in November 2012 when Australian scientific researchers failed to find the island. In fact using modern-day technology, including Google’s geo-locations, they actually sailed straight through the island.

One explanation for the disappearing island is that early explorers in fact came across rafts of pumice from underground volcanoes, mistakenly identifying them as an island.[8]

The ancient city of Pompeii is famous as a civilization who (mostly) fled before their city was buried beneath the molten ash and lava from Mount Vesuvius in AD79.

However it is just 25 years since a Caribbean island which was once a playground frequented by the rich and famous suffered a similar fate.

Plymouth, once the capital city of the island of Montserrat is a modern-day Pompeii, where residents fled a volcanic eruption in 1995. The Soufriere Hills volcano had been dormant for four hundred years when it suddenly began spewing ash across the coast in July 1995.

Over 12,000 residents were forced to flee the series of volcanic eruptions which ensued, burying the city under 40 feet of ash and molten lava.

Today it is the only ghost town which remains the capital city of Montserrat. Plymouth remains in the volcanic exclusion zone, where only the most intrepid travelers venture to witness the devastation on the now uninhabitable southern end of the island.[9] 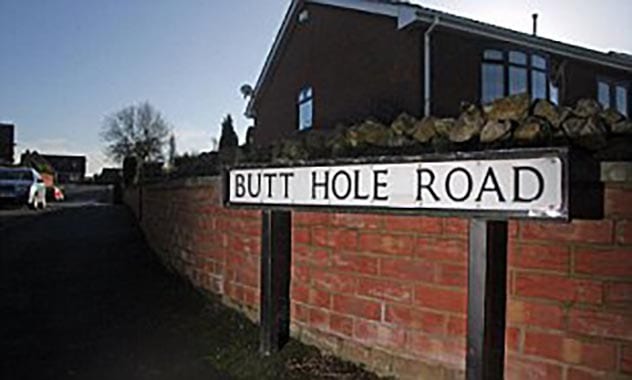 Language connotations tend to change over time and place names are no exception.

Residents of a small UK town became frustrated with being the joke of visitors who flocked for a tongue in cheek selfie with the village’s most infamous road sign.

Located in Doncaster, South Yorkshire, Butt Hole Road was originally named for a water butt at the end of the lane.

However in modern times, the name developed an entirely different meaning, which became a pain in the proverbial for local residents. Not only were they the obvious target of pranksters, but service providers, taxis and delivery companies often thought the address was a joke.

Residents banded together to rename the lane a more demure “Archers Lane”.[10]

About The Author: Lesley Connor is a retired Australian newspaper editor, sharing her love of the bizarre and unusual.

Top 8 Things You Must Do Before Moving To Another Country

Teenagers Who Stop At A Traffic Signal See A Girl Staring...

Triplets Took The Same Birthday Picture For 33 Years, Not Knowing...

Newborn’s Strange Behavior Troubles Mom,40 Years Later She Finds The Reason Behind It

Triplets Took The Same Birthday Picture For 33 Years, Not Knowing This Year Would Be Their last

Woman Dies 27 Hours After Giving Birth, Then Her Husband Opens...

Husband Filed For Divorce Right After Seeing This Family Photo

Any cookies that may not be particularly necessary for the website to function and is used specifically to collect user personal data via analytics, ads, other embedded contents are termed as non-necessary cookies. It is mandatory to procure user consent prior to running these cookies on your website.